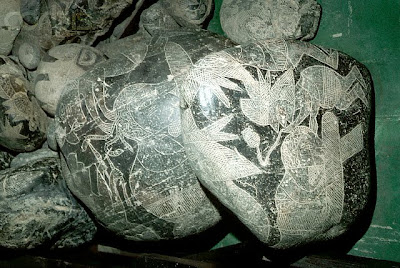 Undoubtedly another one of the greatest enigmas of the archeological world surrounds a collection of some 15,000 artifacts that were found in Peru in 1960. Similar in many ways to the Nasca lines, I refer to a collection of glyphs carved onto stones that collectively form a veritable ‘rock library’ now known as the Ica Stones. The unusual scenes depicted in detailed carvings on the stones appear to be from the Pre-Columbian era and the sheer volume of them is astonishing. But there is also a rather intriguing story that surrounds these enigmatic carved stones. The stones were supposedly found in a cave by a native farmer at a place called Ica, about 300 klm from Lima. The farmer claimed to have found piles of them in various caves and gorges in the area, some scattered about the ground and some slightly buried beneath the surface. At first the farmer had only a few bags of carved stones but then later returned with literally thousands of the artifacts and for some time made a comfortable living for himself selling the stones to tourists at a market stall.
Before long the farmer had become something of a local celebrity and word of his find began to circle in the Archeological community and many experts began to descend on the area to investigate the validity of the stones, Naturally the sudden attention quickly aroused the interest of the Peruvian Government who, fearing Peru would become another Egypt and soon be overrun with diggers and robbers, promptly arrested the farmer to investigate his claims for themselves. It is unclear what was said to the farmer during his confinement but upon his release he suddenly stated in writing that the entire collection of stones was a hoax and that he had carved the stones himself in order to trick the tourists and make some easy money. He had just never realized it would get so out of hand. But there’s much more to the story than that. 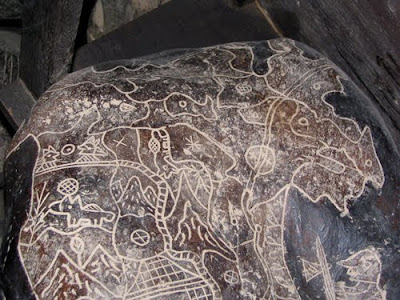 In 1966 the towns’ local physician Dr. Javier Cabrera received one of the stones from a native as a birthday present. The Doctor, who had heard of the farmers novelties, noticed that the stone certainly looked ancient but what had really intrigued him was the fact that it appeared to accurately depict a type of prehistoric fish. The actual farmer in question was wholly uneducated, unable even to read. So how then, puzzled the Doctor, could such a man possibly possess enough knowledge of paleontology to be able to produce an accurate and anatomically correct carving of an extinct sea creature?
Now, somewhat interested, Dr. Cabrera began to visit the farmer and soon became the main recipient of the carved stones, of which it appeared the farmer had a virtually endless supply. The Doctor then began to create a kind of stone library which he organized by subject matter; the subjects including the races of man, ancient animals, lost continents and global catastrophes. He questioned the farmer many times about the source of the stones but the farmer, still in fear of being arrested again and jailed for life, remained evasive and persisted with his story that he had carved the stones himself. (It must also be understood here that removing or selling ancient artifacts carries a heavy penalty under international law, a fact which could help to explain the farmers’ sudden change of attitude when he was arrested). The farmer produced more of the stones for sale every week and after purchasing a few thousand of them Dr. Cabrera became to feel as though he had indeed fallen prey to the farmer and that the man had actually created the thousands of carved stones himself. So he then began pressing the man on the method he had used to carve them but again the man continued to remain evasive and kept refusing to discuss even the method he had used to carve them with the doctor. 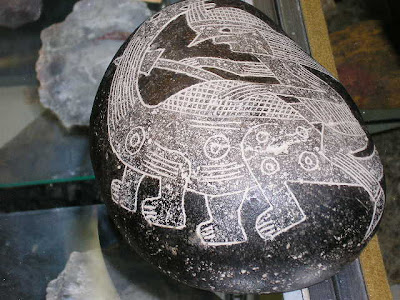 Eventually Dr. Cabrera reasoned that logically, because of the enormous volume of stones in the collection, if the farmer had indeed carved all the stones himself he would have to have carved the first stone when he was 2 years old and then carved one stone every day for over 40 years in order to produce the total library! It didn’t take much to reason that quite obviously such a thing was not possible so Dr. Cabrera then set out to find out the answers about the Ica Stones based on a study of the many designs depicted on them.
The carved stones come in a huge variety of sizes: there are some that will fit in the palm of your hand, others about as large as a medium sized dog and all sizes in between. Every stone depicts an image etched into the surface of the rock in continuous lines, not scratched on by repeated lines. Geologically, they are a form of andesite, a very hard volcanic rock that varies in color from grey to black and is quite difficult to etch using hand tools. (Andesite comes in various forms – coal is also a type of andesite) Notably the etched sections on the rocks reveal a different color than the original patina that appears on the outer surface of the stone and yet the etched grooves also reveals signs of this patina indicating that the etching was done a very long time ago. However patina can also be faked and so one of the stones was also sent for testing to laboratories in Germany who have since authenticated both the patina and the incisions of the etchings as being extremely ancient. 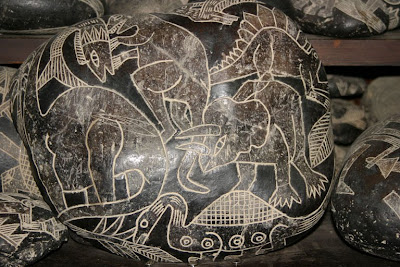 To briefly explain the dating of carved stone: Radio carbon dating, commonly used on such things as pottery or clay figurines, cannot be used on rock because rocks contain no organic material, however the surface of rock has a ‘varnish’ coating covering it which is the result of bacteria and other minute organisms that adhere to it over time. Old rock will have a coating of this thick black varnish which is known as ‘Patina’ on its surface. A good strong patina takes thousands of years to darken, discolor and eventually form a solid coating on each stone. Etching the surface of the stones naturally removes this layer of varnish. On the Ica stones however, this layer of patina can also be found within the etched grooves which indicates that the etching was done an extremely long time ago. At least long enough for the varnish to build up again.
Many of the scenes depicted on the Ica stones are quite astounding and seem well beyond the knowledge of an uneducated farmer from a small Peruvian village.
There are stones showing genetic codes, and the prolongation of life, some that show blood vessels being reconnected via re-absorption tubes. One stone depicts a cesarean section while using acupuncture as a form of anesthetic. There are many stones that clearly depict people riding on dinosaurs and on flying reptiles.
There are stones depicting natives wearing tall crowns and long robes similar to the Incas in appearance while performing medical procedures on patients. Some even depicting heart and brain transplants. Others show men, using telescopes to view an approaching comet. There is a series of four stones that show the four hemispheres of the earth and studies have now shown that all of them are reasonably accurate except that one shows an extra continent that is no longer there. 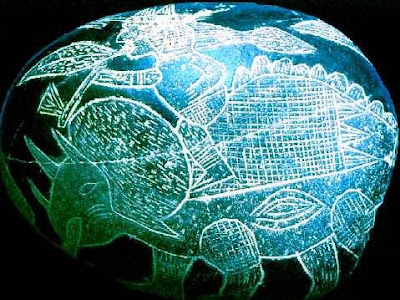 It’s interesting that lost continents are such a constant theme of so many ancient myths isn’t it?
Another very interesting stone shows a rather accurate depiction of some of the lines found on the Nasca Plains even though the lines can only really be viewed from the air. It is difficult to believe such an accurate carving could have been done by a village farmer.
Dr. Cabrera soon reasonably concluded that it simply was not possible that the farmer had carved all the artifacts on his own, he simply did not have the time, the skills needed, or the scientific and botanical knowledge required to create the stones. After some time and after purchasing about 11,000 of the stones, the Doctor became a trusted friend of the farmer. He eventually learned that the man was only released from prison once he had agreed to present a signed confession stating that he was cheating the tourists. He had agreed to say that the stones did not come from the hills but that he had actually carved them himself. It was either that or go to prison for the remainder of his life for selling stolen antiquities.
Dr. Cabrera continued his research in an effort to interpret the maps depicted on several stones even working with numerous geologists to obtain their expertise. Several of the stones had maps on them showing what looked like the world, only in a somewhat weird configuration. Some of the angles and land masses looked vaguely familiar, but the majority of the continents were badly warped into strange shapes making identification difficult. However after further study Geologists have now confirmed that based on current computer projections, the shapes indicated on the rocks are indeed accurate for the planet Earth, as it was – about 13 million years ago, that is, pre-stone age. Some of the carved stones even accurately show ancient star charts.
And again, the poises enormous questions, for how could anyone without very recent scientific knowledge accurately know how the skies looked from the earth and how the earth looked from the skies at around 13,000,000 years ago? Let alone an uneducated farmer in Peru - in 1960. Some local farmers, lured by the fame of the stones, have now taken to creating and selling forgeries to unsuspecting tourists and so stones that have recently appeared from the area are highly questionable. However, there is no denying the authenticity of the original stones. Who actually created them will probably always remain an unsolved mystery but the graphic detail and unquestionable accuracy of the 15,000 artifacts truly poses one of the greatest enigmas and most alluring mysteries of South America.