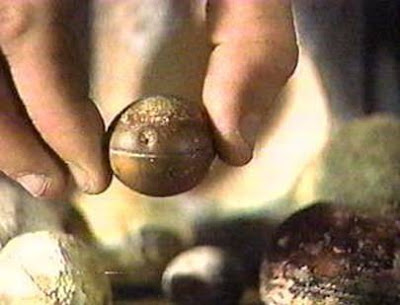 In a most bizarre series of finds that are still ongoing, for the past 60 years or so, miners in Africa have been finding literally hundreds of metal spheres, some from quite deep underground. And at least one of them, possibly more, has three parallel grooves running around its circumference. The spheres seem to come in two types: one is of a solid bluish metal and has white flecks in it and the others are hollow with a kind of spongy centre. The curator of the museum of Klerksdorp in South Africa, where many of the spheres are housed, a Mr. Roelf Marx describes them this way:
"The spheres are a complete mystery. They look man-made, yet at the time in Earth's history when they came to rest in this rock no intelligent life existed. They're nothing like I have ever seen before"
Roelf Marx also wrote a further letter dated September 12, 1984 that contains more information on the spheres. In it he wrote:
"There is nothing scientific published about the globes, but the facts are: They are found in pyrophyllite, which is mined near the little town of Ottosdal in the Western Transvaal. This pyrophyllite (Al2Si4O10(OH)2) is a quite soft secondary mineral with a count of only 3 on the Mohs' scale and was formed by sedimentation about 2.8 billion years ago. On the other hand the globes, which have a fibrous structure on the inside with a shell around it, are very hard and cannot be scratched, even by steel."
(The Mohs' scale of hardness was devised and is named after Friedrich Mohs, who chose ten minerals as references points for comparative hardness, with talc the softest and diamond the hardest.) 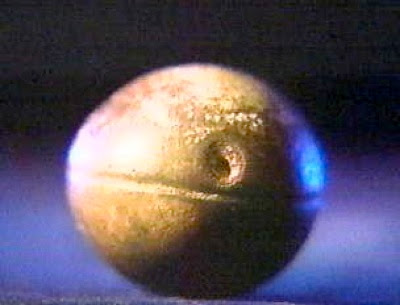 However, as if the mere existence of these metal spheres is not enough there is still another amazing property of the artifacts that captured the attention of a Mr. John Hund of Petersburg about fifteen years ago. While playing with one of the objects on the flat surface of a table one day, Hund apparently noticed that the sphere seemed to be particularly well balanced so he decided to take it to the California Space Institute at the University of California for testing to determine just exactly how well balanced it actually was. What the results of the tests surprisingly showed, was that the sphere was in fact balanced perfectly and exactly.
"It turned out that the balance is so fine, it exceeded the limit of their measuring technology and these are the guys who make gyrocompasses for NASA. The stone is balanced to within one-hundred thousandths of an inch from absolute perfection," explains Hund.
Nobody knows what these stones are. One NASA scientist reportedly told Hund that they do not have the technology to create anything as finely balanced as this. He said the only way that either nature or human technology could create something so finely balanced would be in zero gravity.
The sedimentary rock in which most of these spheres were found is located well below the surface in deep underground mines and is estimated to be a staggering 2.8 Billion years old.