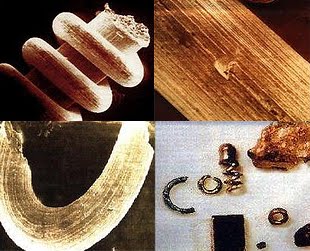 Here are some very inexplicable little items. These most intriguing artifacts were made between 1991 and 1993 by a group of men prospecting for gold on the Narada River, which is located on the eastern side of the Ural Mountains in Russia. In a far cry from gold, what the prospectors found were some highly unusual and mostly spiral-shaped objects, the smallest of them measuring a miniscule 1/10,000th of an inch!
At first glance the objects appeared to be similar to tiny shells or crustaceans only analysis proved them to be something quite different. Laboratory tests subsequently revealed that these most unusual objects are actually composed of an alloy of copper and the rare metals tungsten and molybdenum, though what on earth they are, what they may have been used for or who made them is an utter mystery.
Further tests have calculated these objects to be between 20,000 and 318,000 years old!