Banana: A Fruit that Really should not Exist 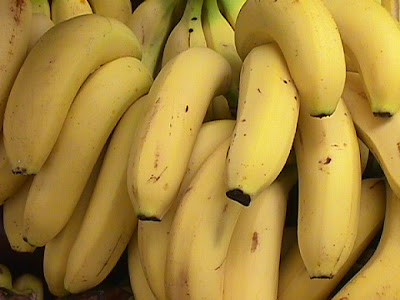 Most people are completely unaware of this fact but there is a fruit that is eaten by millions of people all around the world everyday that is quite remarkable and in all reality, simply shouldn’t exist. I’m talking of course, about the banana. Bananas are actually the most mysterious fruit in the world because bananas have no seeds and what makes this even more mysterious is the fact that they are found in almost every country in the world.
Now that may not sound so odd at first but let me fully explain this enigma to you: Firstly, banana plants are not trees; they are actually a perennial herb. The trunk of the plant is really nothing more than the plants outer leaves. The real stem of the plant doesn’t actually become visible until it pushes out through the top to produce the large purple flower that will eventually develop into the fruit. Then, having finished its perennial reproductive cycle, the plant dies. The problem here, is that in the reproductive cycle of the banana, seeds are completely absent from the mature fruit! A new ‘seedling’ (known as a ‘sucker’) can only ever be generated from a piece of the plants rootstock and yet bananas are found in almost most every place on earth, even on quite remote and isolated islands.
How in the world did they all get there?
The seeds certainly weren’t carried across the oceans by prevailing winds. To fully appreciate this anomaly first consider that the only other seedless plants that exist anywhere in the world are things like seedless grapes, naval oranges and the many genetically modified varieties of commercial vegetables that can now be purchased, the point is, any other seedless plants that exist, anywhere in the world, are all that way because they have genetically modified!
And yet here we have the humble banana, which is also the only food in existence that contains exactly the correct requirements of vitamins and minerals for mans metabolism completely. It is the only food that man can live on healthily, by itself, with complete nutrition, it is found all over the world and yet we have no knowledge of how it could possibly have come into being. It seems highly improbable that the worldwide distribution of a seedless fruit that is perfectly tailored for sustaining man would have just somehow ‘happened.’
It is extremely unlikely for such a plant to have ever been produced by nature all on its own and many people believe that somehow, somewhere, sometime, someone in our far distant past genetically engineered bananas into the widely dispersed and remarkably nutritious plant that we find everywhere in such abundance to day.
These people cite that bananas are living daily proof of an ancient culture that spanned the entire globe in remote pre-history. Botanists also now tentatively agree that the spread of the banana plant appears to have radiated outward from the Pacific region.
The Banana plant incidentally, is not actually a fruit or a vegetable, but it does reach a height of around 30 feet at maturity which makes it the Worlds largest herb and the tallest plant in existence that does not have a woody trunk.