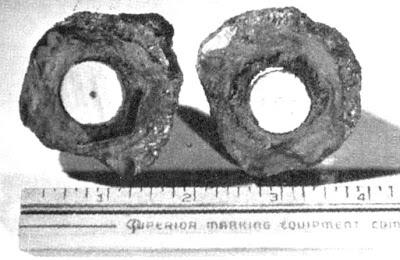 In another equally bizarre find in 1961, the owners of a gift shop in Olancha, California retrieved what appeared to be a normal fossil-encrusted geode while fossicking in the Coso Mountains. Much to their surprise however, when they later cut the geode in half with a diamond saw, instead of a collection of crystals as one would expect, they found an obviously artificial
object inside it.
The encased object had a metal core surrounded by layers of a ceramic-like material and a hexagonal (now petrified) wooden sleeve. To the surprise of all, when X-rayed, the object appeared to very closely resemble a modern day spark plug or some other electronic component, showing far too many striking similarities to be just casually dismissed. The obvious problem here is that it was found encased inside a fossil encrusted geode that was an estimated to be around 500,000 years old! 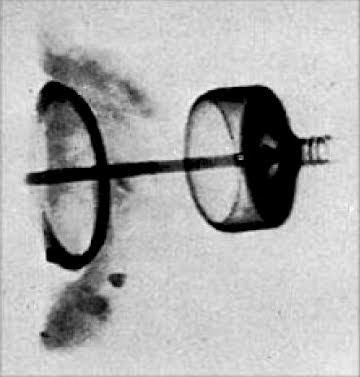 The last known person to be in possession of the intriguing Coso artifact was one of the original people who discovered it a Mr. Wallace Lane. Lane kept the object at home with him but flatly refused to display it to anyone during his later years. It is thought that Wallace Lane has since died and the current location of the artifact unfortunately remains unknown.