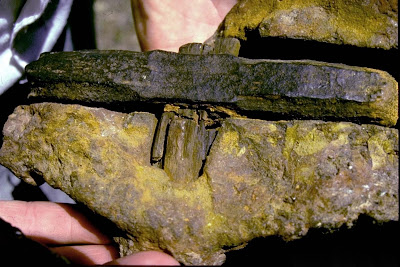 Do you realize how long it takes for an object to fossilize? We are told that the process literally takes millions of years. Consider then that a group of workers quarrying limestone in 1786 came across an amazing artifact in an underground sand bed about 50 feet below ground level. In the layer of sand they found the stumps of stone pillars and fragments of half-worked rock and after digging a little further, they discovered coins, petrified wooden hammers handles, and pieces of other petrified wooden hand tools. The sand in which the discovery was made was lies beneath a layer of limestone that has been dated to be at least 300 million years old and still more recent discoveries of petrified tools have occurred since then.
There was a hammer handle found inside a 100 million year old rock near London, England. This find was particularly unique in fact because though the exterior of the handle was petrified, the interior was discovered to contain an amount of porous coal. Now this is very significant and quite remarkable because there is no scientific way to account for such a thing happening.
To explain, the process of petrification occurs when timber or other organic objects are buried in silt; when this occurs, silicates impregnate the material and dissolve it, slowly replacing the oxygen and hydrogen which begins the process of silification which eventually leads to petrification. Coal on the other hand, is formed by charred timber being greatly compressed under tons of earth. The two processes could not be more different, yet in this case each process must have occurred virtually simultaneously or in extremely short succession. As for Science? Scientists are unable to produce petrified timber containing porous coal through any modern methods. This also completely negates any possibility of the item being a hoax.
The wood handle is partially coalifed with quartz and calcite crystalline inclusions. Tests performed at Battelle Laboratory document the hammer’s unusual metallurgy, 96% iron, 2.6% chlorine and .74% sulfur (no carbon). Density test indicate casting of exceptional quality. A unique coating of FeO, which does not readily form under present atmospheric conditions, appears to inhibit rusting.