I just came across another fantastic find of an unusual skull, that may just change our view of the world, if it is indeed real!
Look at these pictures of the skull that were finally released in September 2010. 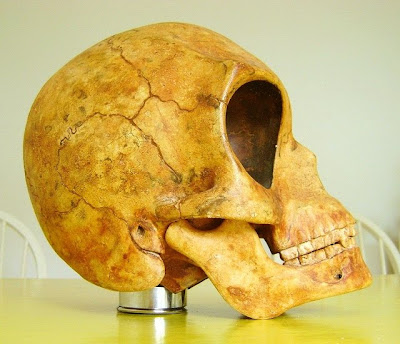 The skull was discovered in July 2007, in Olstykke which is on the Danish Island Sealand. It is just now being “discovered” by scientists.
The Sealand skull was discovered while digging was being performed for replacement of sewer pipes. First thought to be a horse, no other remains that belong to the skull have been found at the site of discovery.
The skull was found with other artifacts pertaining to the Neolithic age, but that doesn’t mean the skull is from the Neolithic age. Carbon 14 dating of the skull put it the age of 1200 and 1280 A.D. And since the skull was found above the pipes being replaced, it highly suggests that the skull hasn’t been buried for long, maybe only 100 years ago. The skull is 1 1/2 times larger than the size of a regular human cranium. The eye sockets are extremely larger than a normal human. Duh! The skull has a very smooth surface which seems to point to it being adapted to a cold climate and the relative eye size is hypothesized to point to a nocturnal creature, something that lived underground, or lived with a very dim sun orbiting its planet.
Suggestions to why it was recently buried include that someone was keeping the skull as a secret, and finally decided to bury the skull to keep its existence unknown.
There is an old tale in Olstykke and nearby villages, that tell of a member of the “Order of Pegasus’ Light” who protected various items, which included an old mysterious cranium and several devices of extraordinary light. These extraordinary light devices were said to be unbreakable metal or ceramic.
Little is known about this “Order” and what other artifacts it may be protecting. Possibly alien artifacts, but that is only speculation at this point. But we do know one thing, the Order was established in 1350, and not much else.
Some known members of the Order are William Shakespeare, H.G. Wells, Thomas Jefferson, Joseph Heller, Rene Descartes, Ambrose Bierce, Giovanni Boccaccio, and others – all writers. 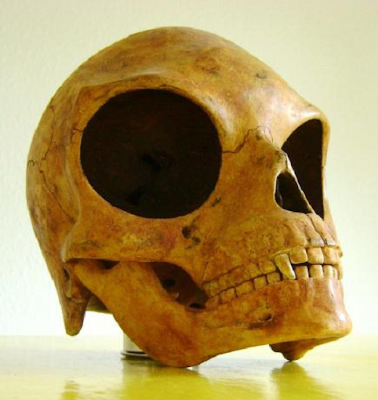 Why an order of writers would keep alien artifacts and devices is a little strange. But since the Order’s name suggests that possibly someone (time traveler or alien visitor?) from either the Pegasus galaxy or Pegasus constellation, came to Earth and gave us knowledge that was kept secret by this order. It does seem to suggest that these writers may have been influenced somehow by this “visitor” and they revealed some of the knowledge they learned through their writings. But no one knows for sure, and never will. But intriguing anyway right?
Anyway, we do have a skull that looks eerily similar to the well known “grey” alien this is widely reported in alien abductions and contacts. Could this be what the skull is – a grey alien? Could it be a skull from a time traveler? It certainly isn’t human by any means. Just like the Starchild skull, which has now been DNA tested and found to have some alien DNA, which is not from our planet.
It is an extraordinary find in my mind. It makes me wonder what else we will find in the future. What more alien looking skulls or skeletons will be found – showing proof that we have been visited before. It will be earth shattering news hopefully. Why this skull was ignored for almost 3 years is beyond me. But finally, scientists are studying this skull and maybe tests will reveal even more astonishing news of its origin. We will have to wait and see I guess. Is this skull real or a sculpture?
There is some that think this is an elaborate sculpture. And I don’t really know one way or another at this point. I do think that the two front canine teeth are fishy – giving that the rest of the teeth are flat like humans, and not pointed like a dogs. I see no reason for the “fang-like” teeth. And the coloring of the skull is suspicious as well. They eye sockets look way too dark compared to the rest of the skull. And the cranial lines seem too perfect, like they were painted on, rather than the skull bones actually fusing that way. But we really don’t know exactly what an alien skull would look like either! But if it’s a sculpture, it’s a pretty good one. And its supposed carbon dating is said to date it to about 900 years. The carbon dating was done at the Niels Bohr Institute in Copenhagen, yet I can’t find any record of the results. If it was a sculpture, then it would have found to be a fake immediately. So I’m hoping for it to be real.
So what do you think? Human yet deformed in some way? And what about those eyes? What about the teeth – that look so human except for the two canine looking front teeth? Is this proof of alien contact from our past?
The Starchild skull is finally revealing its secrets and maybe this Sealand skull will reveal even more, as long as it is real. Can’t wait!