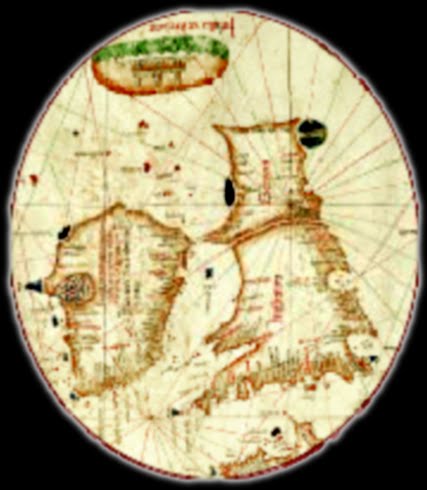 Franco Rosselli was a renowned Florentine cartographer of the 15th century who created a relatively small but richly illustrated copperplate engraving, hand colored on Vellum, measuring just 6 x 11 inches.The piece is now kept in the National Maritime Museum in Greenwich. At the time Rosselli created the map, cartography was still a relatively new and experimental art which makes the revelations in his world map even more amazing. The maps depiction of Antarctica is a work of great accuracy and even names the area quite specifically as Antarticus.
The details on the Rosselli map are extremely well painted and as with the previous maps, geographical features such as the Ross Sea and Wilkes Land are particularly easy to identify on it. Again, what is so perplexing about this extraordinary map is the year it was painted in 1508. According to our history this is a full three and a half centuries before Antarctica was discovered. And yet here again we have Antarctica depicted accurately on a 15th century Florentine map.