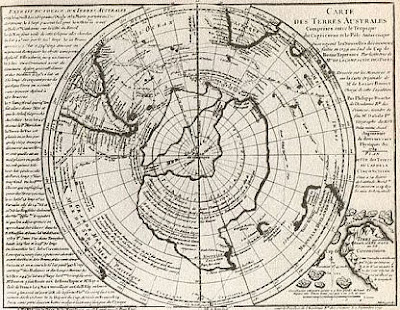 Phillip Bauche was a French geographer of the 18th century who also drew a map that clearly shows Antarctica except that Bauche's map shows Antarctica two separate land masses, with detailed shorelines. For many years the map was generally considered to be wrong because when Antarctica was discovered it actually looked nothing what Bauche had drawn.
Then in 1958 a seismic survey of Antarctica was carried out which surprisingly showed that Antarctica was indeed two archipelago islands covered by a thick layer of ice that made it appear as only one land mass and not only that, but that the general topography of the lands beneath the ice matches the drawings on the Bauche map in every detail. So how on earth this can be in any way possible? This map means that Bauche was in possession of a correct map showing Antarctica 100 years before it was discovered and not only that, but without any ice on it. Antarctica has not been in an ice free condition for a minimum of at least 10,000 years and many scientists believe that the period of time to be more like several million years.