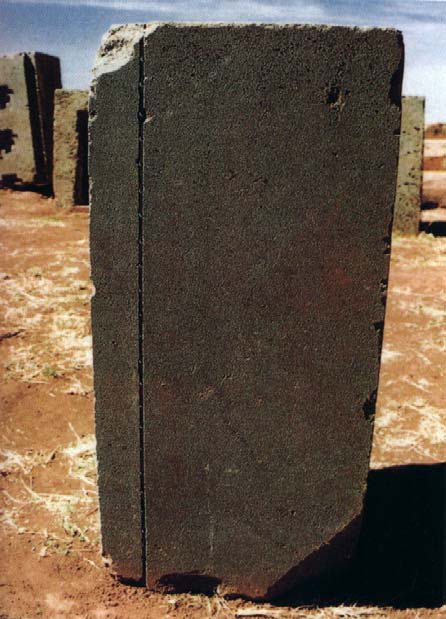 There is a most interesting thing that can be found in the Puma Punku Complex near Tiahuanaco. At the ancient site, standing upright in a courtyard, there can be found a tall flat stone that has a striking feature on it. The entire complex is actually quite remarkable, featuring a huge doorway complete with lintels that has been cut from a single stone and many other odd shapes that appear to have been machined including this one.
The remarkable thing about this ancient slab is that it has a perfect cut or groove approximately 1cm wide running down its entire length while inside the groove there is a set of equidistant holes that appear to have been drilled into it. The site is only a few hundred meters from the famous site of Tiahuanaco but the stone slab and many other enigmatic features of the site are so hard to explain and pose so many difficult questions that the entire site is virtually hushed up by the entire archeological community and almost never mentioned to tourists.
The consistent accuracy of the groove and the holes within it cannot possibly have been achieved with any known types of hand tools. It would appear that the only satisfactory explanation is that it was done by a machine or possibly – by molding?