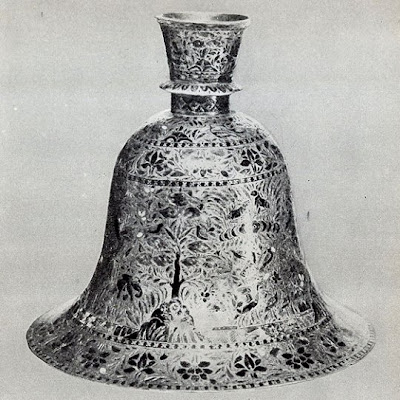 In June, 1851, ‘Scientific American’ reprinted a report that had first appeared in the Boston Transcript about a metallic vase that had been discovered by miners. The vase was found in two parts among rubble that had been dynamited out of solid sedimentary rock in Dorchester, Massachusetts.
The strange thing though, is that it came from about 15 feet below the surface and was deeply embedded inside the rock. This indicates it had been there for an extremely long time.
The bell-shaped vase measures 4-1/2 inches high and 6-1/2 inches at its base and consists of a zinc and silver alloy while the sides are decorated with designs of flowers and bouquet arrangements, all inlaid with pure silver. The workmen ship on the vessel is exquisite.

Through the years it has been examined by experts, more recently (last 30 years or so) by the Museum of fine Arts in Boston, which operates a state-of-the-art analysis laboratory built in cooperation with M.I.T. It was run through a thorough battery of tests for 2 years, which failed to confirm it's origin. However, geologists dated the rock matrix the vessel was found in to 1,000,000 years old and acid testing on the vessel confirms these could be credible time parameters.
How did this vase come to be solidly embedded within 15 feet of solid sedimentary rock?