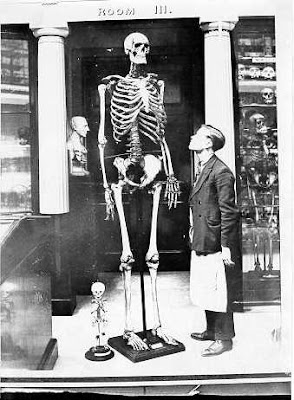 "There were giants in the earth in those days."
- Genesis 6:4
And not just in those days:
In 1884, a skeleton 7 feet 6 inches long was found in a massive stone structure likened to a "temple chamber" in a mound in Kanawha County, West Virginia.
In 1925, amateurs excavating an Indian mound at Walkerton, Indiana, uncovered the skeletons of eight ancient humans measuring from eight to almost nine feet in height. All eight had been buried in “substantial copper armor.”
The Lovelock Reviewer-Miner reported in June of 1931 that two large skeletons were found in the Humboldt lake bed near Lovelock, Nevada. The first of these found measured 8 1/2 feet tall and appeared to have been wrapped in a gum-covered fabric similar to "the Egyptian manner."
The San Diego Union (August 1947) reported that F. Bruce Russell, a retired Ohio physician, had discovered a caves underneath Death Valley containing the mummified remains of men 8-9 feet tall, clothed in gray material "taken from an animal unknown today" accompanied by hieroglyphics and depictions of prehistoric animals.
Regardless of the veracity of these stories, if real-world North America can have legends of giant-folk, then the Strange New World of the City, certainly has them for real.
"It is only within the last few years that most people have stopped thinking of the West as a new land. I suppose the idea gained ground because our own especial civilisation happens to be new there; but nowadays explorers are digging beneath the surface and bringing up whole chapters of life that rose and fell among these plains and mountains before recorded history began. . . . We hear rumours of still older things, too . . ."
- H.P. Lovecraft and Zealia Bishop, "The Mound"
Before the arrival of the people considered by the explorers from the Old Countries to be the "natives" of the new continent, there was a more advanced civilization in the New World. Perhaps they were descedants of an even more ancient race from a land called Meropis, now vanished beneath the sea. Or maybe they came from another world. Whatever their origins, these Ancients, as they are now known, built the underground complexes explored by adventurers, and buried their dead in great mounds.
And they were giants. Or at least giantish, with males being perhaps eight feet tall--though their were some populations that were even taller. Their rumored degenerate descendants, the hill-billy giants of the Smaragdines, are taller still--brutish males being just shy of ten feet tall, and their statuesque females somewhat under nine.
But it's the Ancients that concern us here. They're considered extinct, but perhaps there are lost cavern-cities where they can still be found. They were rumored to be masters of great magic, as well. Perhaps some found a way to preserve themselves in some sort of ageless sleep, waiting for the time when they could reclaim their rulership of this land.