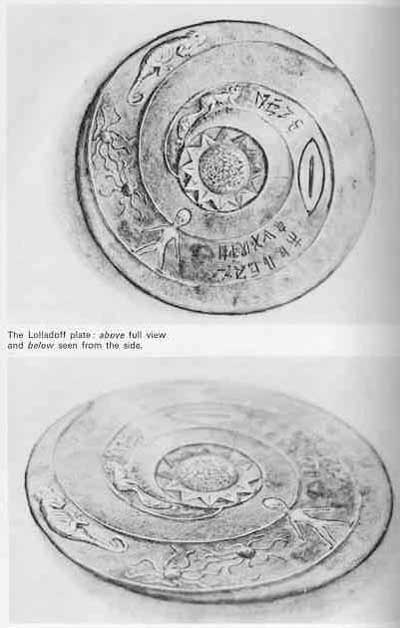 There are very view artifacts more mystifying than the Dropa stones. The tale of the stones is quite an amazing story and some time should be given for a reasonable account.
I just love this story...
Our tale begins in 1938 high in the BayanKara-Ula Mountains on the border between China and Tibet. A group of archeologists, led by a Professor Chi Pu Tei, were exploring a series of interlinked caves when, much to their surprise, they came upon a collection of neatly arranged graves within the cave system. The graves contained within them a number of somewhat unusual skeletal remains and the scientists at first surmised that they had discovered a new species of ape.
However, since it is unreasonable to conclude that apes buried each other it was deduced that they skeletons could only be of an unusual and possibly hitherto unknown race of human beings. The remains were quite unique in that they were only around 5 feet in height, had unnaturally spindly bodies and quite large and ‘overdeveloped’ heads.
While the archeological team was studying the skeletons, one of the men also accidentally stumbled across a large, round stone disk that lay half buried in the dust on the floor of the cave. The disc had a hole in the center and a fine, spiral groove radiated to the rim and looked ridiculously like a kind of 'Stone Age Gramophone record'. Closer inspection, however, showed that the spiraling groove was, in fact, a continuous line of tiny and very closely written characters that had been somehow meticulously inscribed on to the surface of the disc. The object, it appeared was indeed a record of sorts, though not of the gramophone variety. On the walls of the caves themselves archeologists also discovered crude pictures of the rising Sun, the Moon, the Earth and some unidentifiable stars all joined together by lines of pea-sized dots. The discs and the cave drawings have both been dated at around 12,000 years old.
In all, 716 such discs were eventually found and retrieved from within the cave system; all have been dated as being between 10,000 and 12,000 years old. Each stone disk is precisely 9 inches (22.7 cm) in diameter and 3/4 inch (2 cm) thick, each disk has a perfectly circular 2 cm hole in the exact center and each bears an inscription in the form of strange carved hieroglyphics.
For 20 years after their discovery, all attempts to translate them having failed, the discs sat in the Peking museum mostly forgotten. Finally in 1963 another Chinese Professor, Dr. Tsum Um Nui was finally able to break the code and set about deciphering the discs. And it’s here that the story becomes even more intriguing. Initially, the Professor’s conclusions on the meaning of the discs was considered so shattering that his transcriptions were suppressed and he was forbidden to publish his findings by the Peking Academy of Pre History. However two years later in 1965, Dr. Nui and four of his colleagues at last received permission to release his transcription.
The story it told was astounding, to say the least for the discs told the tale of a spaceship, perhaps like a probe or scout ship, from a distant planet that crash-landed in the Himalaya Mountains region thousands of years ago. They tell how the surviving occupants of the spacecraft, ‘the Dropa’, had taken refuge in the caves of the mountains but despite their peaceful intentions, they had been misunderstood by members of the local Ham tribe who were occupying neighboring caves. The ham tribe distrusted them and hunted down the survivors and killed some of them.
According to Dr. Tsum Um Nui, one of the first lines of the hieroglyphs reads:
"The Dropas came down from the clouds in their aircraft. Our men, women and children hid in the caves ten times before sunrise. When at last they understood the sign language of the Dropas, they realized that the newcomers had peaceful intentions".
Another section mentions that the Ham Tribe eventually became the friends of the Dropa and even expressed regret that their spaceship had crash-landed in such remote and inaccessible mountains and that there had been no way of building a new one to enable the Dropa to return to their own planet.
However, in those 27 years since the discovery of the first disc, archeologists and anthropologists had also learned a good deal more about the isolated Bayan-Kara-Ula region and much of the information seemed to corroborate the bizarre story recorded on the discs. Local legends, still surviving in the area, also speak of small, gaunt, yellow faced men who 'came from the clouds, long, long ago'. These legends tell of men who had huge, bulging heads and puny bodies and were considered to be so ugly and repellent that they were hunted down by local tribesmen on horseback and many were killed. The description of the 'invaders' is also remarkably close to the skeletons originally discovered in the caves in 1938 by Professor Chi Pu Tei.
Most interestingly, the cave systems of the BayanKara-Ula Mountain area are still inhabited today by two semi-troglodyte tribes known as the Hams and the Dropas. The Dropa tribesmen are themselves, extremely odd in appearance, being somewhat frail and stunted and averaging only about five feet in height. They are neither typically Chinese nor Tibetan and anthropologists readily admit: "Their racial back-ground really is a mystery." Are the Dropa the descendants of the people mentioned in the discs? Do these strange discs actually record a disastrous space mission by alien astronauts 12,000 years ago? Nearly all the leading theorists believe so. We may never know for sure but the message contained in the discs is extremely fascinating none the less.