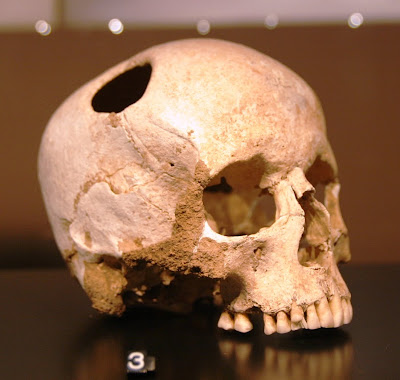 Apart from enigmatic works in stone there are also telltale signs of extremely advanced surgical procedures that were performed in days long past. These come in the form of numerous skulls from the Neolithic age that appear to have been trepanned. Trepanning involves inserting plates into a patient’s skull. It’s a delicate and quite advanced medical procedure. Richard Mooney explains the process in his book ‘Colony Earth’ in this way:
"Trepanning today is an operation in which a section of bone in the skull is removed, either to ease pressure caused by a tumor or blood clot, or to remove splinters of bone caused by a skull fracture, and the cavity closed by a plate. The operation is hardly minor and requires great skill and care to perform. It is difficult to believe that Neolithic man - if he was, as has been thought, extremely primitive - could have carried out such operations with the crudest techniques, a flint knife, and no anesthetics or notions of hygiene." 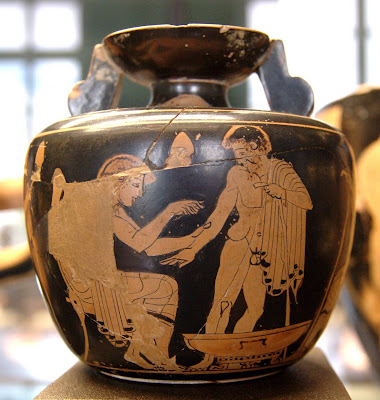 Evidence shows that the survivors of this ancient cranial treatment also went on to live for years afterwards, this is very remarkable considering that up until quite recent times, patients undergoing any type of trepanning had a very high mortality rate due to infection, blood poisoning and the other obvious complications involved with cranial surgery. Still more evidence of ancient trepanning also comes to us from the former Soviet Union where examination of several skulls unearthed at Ishtikunuy near Lake Sevan in Armenia, indicate a similar highly developed technique of cranial surgery employed over 4000 years ago! One patient had obviously suffered a serious head injury and the prehistoric surgeon had neatly plugged the fracture by using a carefully shaped wedge that had been delicately crafted from animal bone. The skull showed obvious signs that the patients bone tissue had then grown over and enveloped the plug which adequately indicates that the person had survived the operation and lived for quite some time afterwards.
Another similar skull was found revealing that one woman had been operated upon to remove an inch wide object that had smashed through her skull, penetrating directly into the brain but the surgeon had cut around the object to remove the splinters and again closed the wound using a section of crafted animal bone. Such an operation would have been incredibly complex and
would also have undoubtedly involved brain surgery and yet the growth of the bone over the wound again shows that this patient of prehistoric times was then able to live on for many years afterwards.