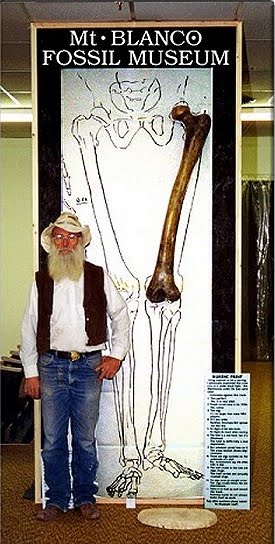 In the late 1950s during the road construction in south-east Turkey in the Euphrates Valley, many tombs containing the remains of Giants were unucovered. At two sites the leg boes were measured to be about 120 cms "47.24 inches". Joe Taylor, Director of the Mt. BLANCO FOSSIL MUSEUM in Crosbyton, Texas, was commissioned to scupt this anotomically correct and to scale, human femur.
Thi "Giant"stood some 14-16 feet tall, and had 20-22 inch long feet, His or Her finger tips, with arms to their sides, would be about 6 feet above the grounds.
The biblical record, in Deuteronomy 3:11 states that the Iron Bed of Og, King of Bashan was 9 cubits by 4 cubits or approximately 14 feet long by 6 feet wide.
Genesis 6:4
There were Nephilim (Giants) in the earth those days; and also after that when the sons of God (Aliens?) came in unto the daughters of men, they bare children to them, the same mighty men which were old, men of renown.